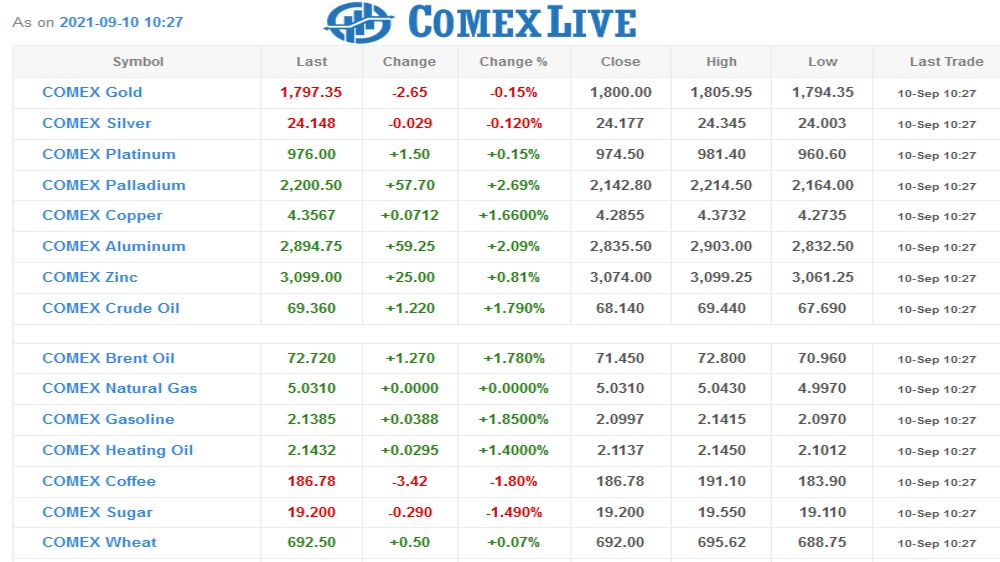 The employment situation report from the Labor Department revealed the key non-farm payrolls component gained only 235,000 compared to a predicted increase of 720,000. The unemployment rate was 5.2% in August, which was approximately in line with market projections and compares with the 5.4% unemployment rate from the July report.

July non-farm payrolls were adjusted significantly higher from an already strong number, so that may be one reason gold and silver prices retreated from initial gains Friday, before then rallying once again.

The Federal Reserve closely watched the labor report, as it helps determine how future monetary policy will be guided.

Federal Reserve Chair Jerome Powell said in public remarks last week that, “If the economy evolved broadly as anticipated, it could be appropriate to start reducing the pace of asset purchases this year.” This would set off the process of removing one key element of the central bank’s crisis-era toolkit for supporting the economic recovery, which has also served to underpin equity prices.

“What we’re seeing is the market really trying to wrestle with the idea of what matters to it more: Is it about the economy, or is it about monetary policy?” Steve Sosnick, Chief Strategist of Interactive Brokers, told Yahoo Finance Live on Friday. “Now, we’ve been in a monetary-driven market for so long it’s hard to say that monetary factors aren’t at the forefront of the market’s mindset right now.”

“But what I think we may be seeing here … we can’t really figure out whether this delays tapering in a meaningful way,” he added. “But there’s stuff in here that is not necessarily bad other than the headline number. Wages are good, the unemployment rate is good.”
Robust Cash Flow

While the jobs report may be a drag on stocks and a potential boost to metals in the short-term at least, analysts are generally optimistic that there will be a continued economic recovery, and companies have robust cash flow due to favorable monetary policy.

“We’re continuing to see ups and downs with Delta, but aside from those changes in sentiment at the margin, the bigger picture is that we still have a self-reinforcing recovery,” Rebecca Patterson, Bridgewater director of investment research, told Yahoo Finance. “We’re seeing companies flush with cash; we’re seeing a huge amount of demand that was obviously pushed higher thanks to all the fiscal and monetary stimulus over the last year, companies trying to meet that demand, hiring, being forced to lift wages. As the consumer gets higher wages and jobs, they have more ability to spend.”

“At the end of the day, it’s the straightforward monetary policy, the fiscal still flowing through, and this positive flywheel of businesses and consumers reinforcing each other that’s helping to lift the market,” she added.

Technical analysts for silver and other precious metals also see the potential for more upside in industrial metals.

According to Kitco analyst Rajan Dhall, “The 4-hour chart below shows that silver is recovering from a long-term downtrend. The price dropped from 1st June ($28.71/oz) down to $22.29/oz. Since then, the price has made 3 higher lows and broke through the $23 and $24/oz psychological zones.

Kitco added, “The price has moved out of the value area of the current consolidation, but the bulls will be looking to see if the $24.68/oz resistance level can be broken to the upside. Beyond that point, the next resistance zone lies at $25.69/oz.”

There are a few potential pitfalls for silver, however.

Some reports state that China will introduce yuan-denominated commodities futures trading that will be available to foreign traders and investors, which could affect the precious metals markets. China’s State Council announced Friday its plans to offer more commodities futures, including shipping contracts. Foreign investors currently already have the ability to trade China futures markets like crude oil, iron ore, rubber, and bonded copper. The official statement announced plans to push the introduction to overseas traders by creating an “international commodity futures market priced and settled in renminbi.”

In addition, some analysts are skeptical that silver will play a significant role in the future of currency, even if gold takes on its traditional role as a standard, supporting fiat currency. Instead, some experts see blockchain fulfilling that function.

“Even if global finance adopts a new gold standard in the future, silver may never go back into circulation as money,” Tiggre wrote in a recent research report.
The Blockchain Path

Speaking to David Lin, anchor for Kitco News, Tiggre said that blockchain technology might substitute the role that silver has historically played, representing fragments of the value of an ounce of gold.

“You used silver to make change, and you used copper to make change for silver. That’s how it was. But, in today’s world, we have solved that problem beautifully with the blockchain/distributed ledger technology. There are dozens of goldbacak cryptos right now,” he said.

Tiggre also noted that the traditionally interconnected relationship between silver and gold may be fracturing and that silver may begin to track copper instead.

“Silver’s value would be derived from its industrial supply and demand fundamentals. The price of silver would track copper more closely than gold,” he wrote in his research report.

Investors looking to get silver exposure without having to hold the metal itself physically can look to ETFs. The Aberdeen Standard Physical Silver Shares ETF (SIVR) and iShares Silver Trust (SLV) can help track the silver market.

SIVR, which is up over 3.34% Friday, uses a physically-backed methodology, an idea that was popularized by ETFs due to investors growing tired of the complexities of futures contracts and the dangers that are associated with them. By using this physically-backed strategy, this fund can eliminate the issues of contango and backwardation and give investors more realistic pricing of the metal it holds.