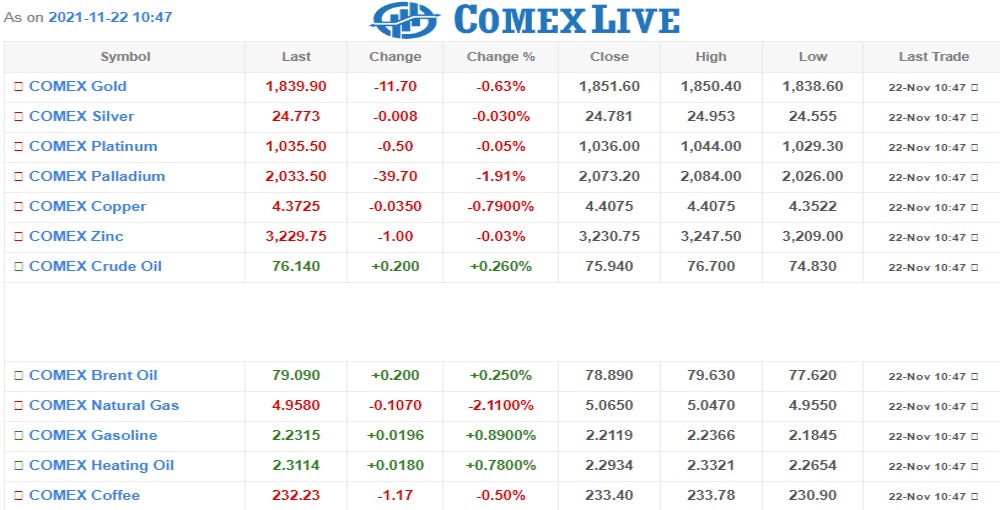 Crude oil fell to seven-week lows on Monday, extending declines after the previous session’s slide, on concerns about excess supply after Japan said it was weighing releasing oil reserves and over demand from a worsening Covid-19 situation in Europe.

WTI and Brent prices hit their lowest since Oct. 1 earlier in the session. They slumped around 3% on Friday.

Japanese Prime Minister Fumio Kishida signaled on Saturday he was ready to help counter soaring oil prices following a request from the United States to release oil from its emergency stockpile.

Germany warned on Friday it may need to move to a full lockdown after Austria said it would reimpose strict measures to tackle rising infections.

“Austria imposed a lockdown earlier this month, while Germany is poised to agree on mandatory remote working,” ANZ said in a note.

“In Ireland and the Netherlands, people have already been instructed to work from home where possible. This comes amid the prospect of releases of oil from strategic reserves in China and the U.S.”

The White House on Friday pressed the OPEC producer group again to maintain adequate global supply, days after U.S. discussions with some of the world’s biggest economies over potentially releasing oil from strategic reserves to quell high energy prices.

In Japan, though, laws only allow reserves to be tapped if there are supply constraints or natural disasters.

“We’re proceeding with consideration as to what we can do legally on the premise that Japan will coordinate with the United States and other countries concerned,” Prime Minister Kishida told reporters.

Investors were also watching developments in the middle east after Saudi state media reported early on Monday the Saudi-led coalition fighting the Iran-backed Houthi movement in Yemen said it detected indications of an imminent danger to navigation and global trade south of the Red Sea.