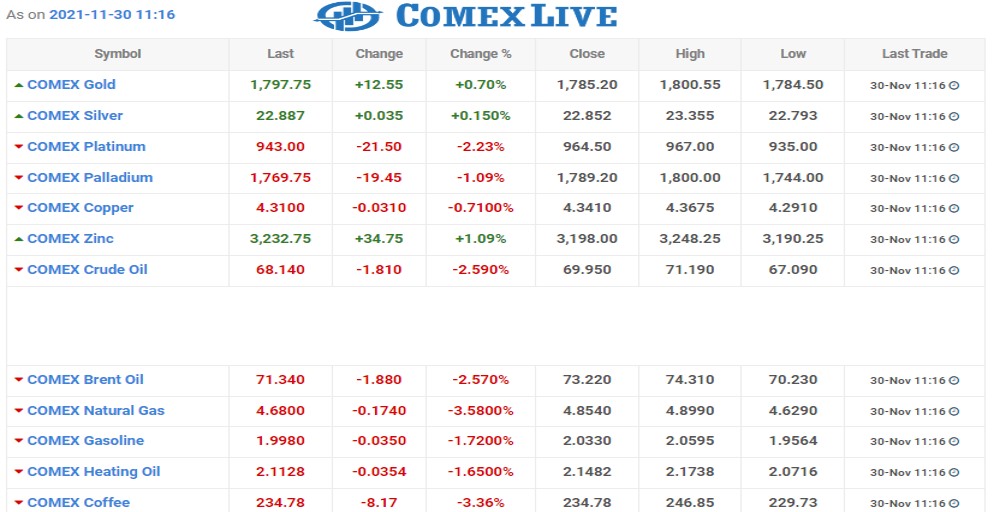 Oil prices tumbled more than 3% on Tuesday after Moderna’s CEO cast doubt on the efficacy of Covid-19 vaccines against the Omicron coronavirus variant, spooking financial markets.

The head of drugmaker Moderna told the Financial Times that Covid-19 vaccines are unlikely to be as effective against the Omicron variant of the coronavirus as they have been against the Delta variant.

The Moderna CEO’s comments were just a catalyst for the market which was already weak, said a Singapore oil trader who declined to be named due to company policy.

Oil plunged around 12% on Friday along with other markets on fears the heavily mutated Omicron would spark fresh lockdowns and dent global growth, hurting oil demand.

The World Health Organization said on Monday Omicron posed a very high risk of infection surges, and several countries stepped up travel curbs. It is still unclear how severe the new variant is and whether it can resist existing vaccines.

With the demand outlook under a cloud, expectations are growing that the Organization of the Petroleum Exporting countries, Russia and their allies, together called OPEC+, will put on hold plans to add 400,000 barrels per day (bpd) of supply in January.

“We think the group will lean towards pausing output hikes in light of the Omicron variant and the oil stockpile release by major oil consumers,” Commonwealth Bank commodities analyst Vivek Dhar said in a note.

Pressure was already growing within OPEC+, due to meet on Dec. 2, to reconsider its supply plan after last week’s release of emergency crude reserves by the United States and other major oil-consuming nations to address soaring prices.

“Following the global strategic reserve releases and the announcement of dozens of countries restricting travel to and from South Africa and neighboring nations, OPEC and its allies can easily justify an output halt or even a slight cut in production,” OANDA analyst Edward Moya said in a note.

“Citi calculates that OPEC+ actual monthly additions have averaged 262,000 b/d rather than 400,000 b/d, given the inability of so many OPEC+ countries to produce up at the level of their benchmarks as they have lost capacity for lack of investment,” the bank said in a note.

“The discrepancy means that withholding that (small) amount would be largely meaningless in the global supply/demand balance for oil.”

Also weighing on the market is the prospect of a resumption of oil exports from Iran, following upbeat comments from diplomats as talks resumed on Monday between world powers and Iran on reviving a nuclear pact.